These are designed for orchids that are planted in bark, but can be used with a boring old plastic pot slid down inside to dress up any plant.  They also look spectacular with a tea light inside!

I started making orchid pots for my own use, and after playing with several different designs, I found these were by far the most visually interesting and even better, they work!  In the wild, many orchids live perched on tree branches getting daily rain, and these orchids like to be planted in bark so the roots get a lot of air and drainage.  Most commercially available orchids fall into this category, and these pots work great.  Other plants can be left in the ugly plastic pot and the pot dropped inside these to quickly and easily dress them up.  I also noticed a tea light in these creates a wonderful luminary. 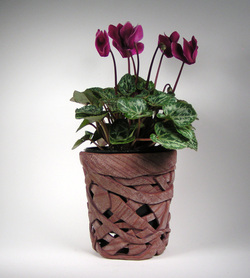 Here I decorated the red clay slab with porcelain slip and a textured roller before I cut the pieces.  The roller had a wood grain texture that shows through the slip, giving the whole piece an odd look.  I might have to fool with some other colors in this technique!  Its kind of fun  and seems to be pretty popular.  I finished the piece off with a bit of iron oxide rubbed off all but the deepest areas, so it emphasizes the pattern created by the cut pieces.  Hmmm, might have to try a light coating of slip done the same way on a plain clay one, that might be interesting!  More ideas!  :) 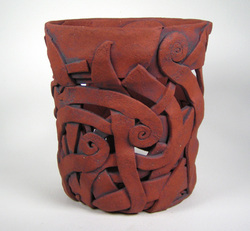 I've been playing with the designs on my orchid pots this past month, and I've come  up with some interesting variations.  Well, I think they're interesting anyway!  Here I took a long skinny triangle and rolled the tip into a spiral, then 'bent' the main part of the triangle into a swirl across the surface of the pot.  The way these interact makes the pot far more interesting than the static triangles I've been using!  This one was made from a red clay and then stained with iron oxide.  I used one of the mossy stamps I made to help seal the connecting points, and the textured areas pick up a bit more of the stain than the flat areas, giving the piece an ancient look.  (SOLD) 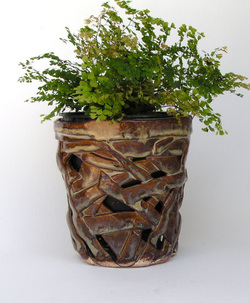 Here I've just dropped the grocery store pot inside, but you could also use green moss between the plastic and the orchid pot for a slightly different look.  These would make great centerpieces. (SOLD) 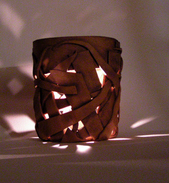 Here is one of my little orchid pots (this one is sold) with a tea-light in it.  They look great!  Now I want to do a series out of porcelain so you will have the added fun of different transparencies along with the oddly shaped openings.  I've actually got one in the kiln firing right now, first firing, so I might even have a finished one to show in a week or two! 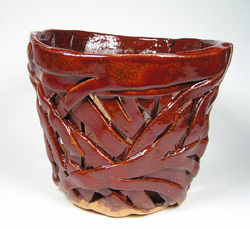 These are done over a slightly larger form because someone requested a wider top.  Its amazing how much difference one little change can make in how long they take!  I have to roll out another slab in order to have enough clay to add the one or two inches in diameter at the top, which means I have to charge more, so we shall see how these fly.  This is a new glaze, 'Deep Firebrick' which I really like.  I've also got some other new glazes to try OVER this one, they're supposed to make some really fun combinations. 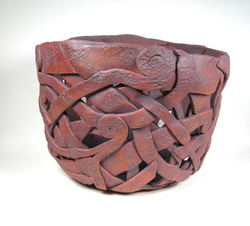 This one sold, it was the second one I made while doing a custom order (Murphey's Law of Custom Orders and all that!  If I only make ONE, something goes horridly wrong and I have to remake.  But, if I make two, they both come out.  It ended up selling to a friend of the customer who bought the first one, so that was nice!  It measured 6 1/2 inches tall by 8 1/2 inches wide.  I actually ended up making FOUR of this one, but the first two had some design issues and ended up in the scrap bin.  Once I figured out what shape/thickness of clay worked best, they're easy.  Going to have to make some more of these!  (SOLD)