Festival of Art in Stout Park 2013

A small local show, 45-ish booths in the park around the Manley Art Center.  This was my booth, and for a first year show the sales were ok.  Next time I need more starfish plaques and a few more mature kusamonos with weeds instead of run of the mill plants from the bigbox.  They went over well even with what I had to show people! 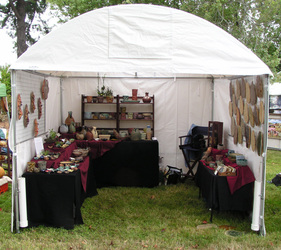 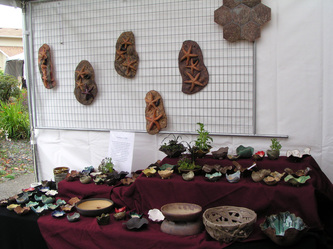 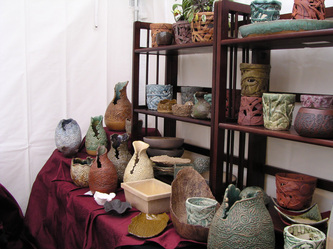 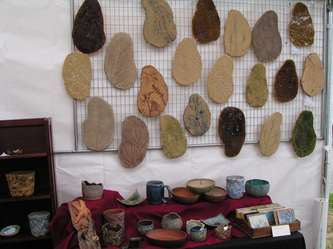 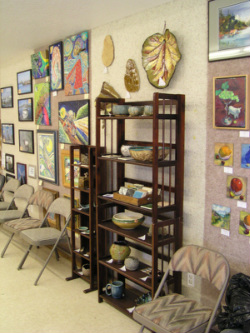 The Mudslingers have the wall at the Art Center for September and October, so I've got some pieces up there.  The tile box, some sauce dishes, the fishies, and a few other pieces of mine, plus a few from Joanne Scherr and  a bunch from Joan Eddy. 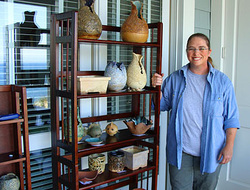 This is a picture Nola Range took for her blog (go check it out, she has great pictures!) of me at the show August 15, 2012.  Me, I just took product shots.  I really should have gotten shots of the whole display, this year I had a lot of orchid pots.  I was at the Woodruff Garden, which is about 1/4 of the way down Nola's page, and as its where I'm working in my day job, I knew where to set up out of the wind and sun but still get the spectacular view.  Nola's blog, wildriverscoastart.com, is all about the Brookings area art scene.

The show itself is a fund raiser for the local Garden club and Master Gardeners, and its always a fun laid-back show with just a few local artists. 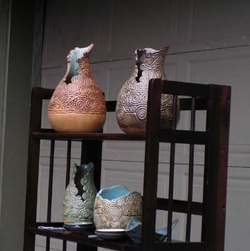 I've actually done the Coastal  Garden and Art Tour 3 or 4 years now, but I don't have pictures from previous years.  This is the shelf I had set up at the Shoan Garden at the 2011 tour, actually in the driveway because the garden has quite a slope.  This was pretty central and several garden paths led past and around so the traffic was pretty good!